I always wanted work with kids, it was something that I had pending, and when I turned 29 years old, I decided to take a year for me and do this volunteer.
I had never been in the Baltic countries, so it was also an opportunity to travel and know.
I arrived in Kaunas at the end of September. At first everything was new, a country I didn´t know, but it wasn´t the first time I lived away from home, and adapting was fast, although at first the people of these countries may seem cold and distant, compared to the spanish character, I immediately realized that they are polite and kind people when you talk to them, and the people in the kindergarten were nice and I knew the children soon, aware that I had to earn their trust and that it was something that I was going to Do the next eleven months. 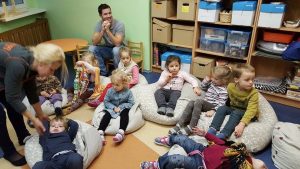 In my personal experience, it was interesting to see the differences between the youngest children, barely two years old, and the oldest, five years old, and how they react and how each one was different, with their personality and their character.
Meanwhile, the temperatures were falling more and more, and everyone told me, “winter is coming”, both a joke and a warning.
In the Kolpingo we develop a daily routine, with the chants of welcome in the morning, breakfast, free games, the morning walk, lunch time … in addition to different activities according to the day 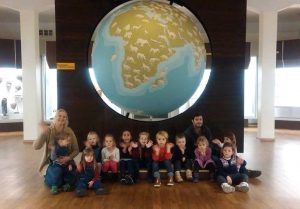 One day we went to the natural museum, and we were able to see different types of stuffed animals and learn a lot together.

October 12 is the national day in Spain, as it recalls the travel of Columbus and the discovery of America, where the colonies settled, and thanks to that epic trip, Spanish is spoken today in so many countries of the other continent.
That day I gave a talk to the children, talking a little about history, while the teachers translated from English to Lithuanian. It was fun and didactic. 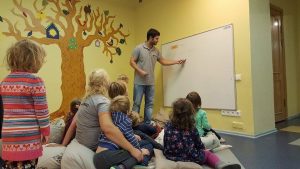 Gradually I understood the dynamics of the Kolpingo and the children were affectionate and friendly with me, and I learned a lot from them and with them.
It was time to meet other volunteers, in a meeting of welcome and coexistence together in an extraordinary place in Trakai, in a hotel with many amenities and next to one of the many lakes in the area. We spent a few days getting to know volunteers from other countries and with talks and activities. 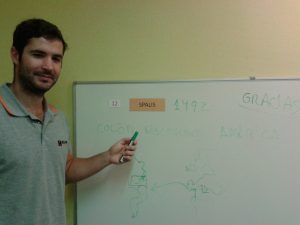 Being able to exchange experiences and see the points of view of people from different countries helped a lot to all those who were there.
It was autumn, but you could be outdoors, with some coat, and be in touch with nature, in a place with so much charm. The place had sauna, and we even had the opportunity to jump into the lake one night, after warming up well in the sauna. The water was very cold, but it was quite an experience.
For me it meant knowing a new landscape, unlike other places 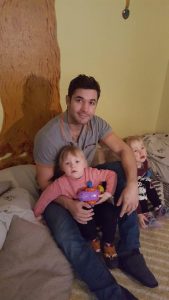 in Europe where I had been before, and at night you could see an impressive starry sky.
During one of the afternoons, we had a dinner by country, and the group of Spaniards prepared typical foods of our country, so that other volunteers knew a part of our gastronomy.

Returning to Kaunas was the birthday of Kotryna, a two-year-old girl who had not yet spoken but who was beginning to develop different skills. It was endearing to watch them grow. At the kindergarten, birthdays are celebrated together

The day we went to visit the theater and puppets we had to take the trolleybus, and that always requires an extra attention, when going with the children through the city and with so much

traffic. Each child goes with his vest, and it is easy to locate them and go all together.

The temperatures were getting lower and the days sho 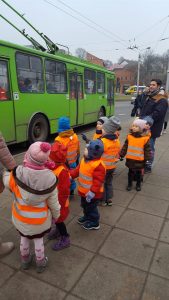 rter, as I had been warned. Luckily I had good warm clothing. To cope with my free time, I played sports and had my books and music, which make the best company when the light is so scarce and the winter is hard.
On one of the morning walks, we could observe the placement of the Christmas tree in the most well known and central square of Kaunas.

And the first snow came. Although I had been warned about it, I had never been subjected to such low temperatures for so long. That did not stop us from going as usual to the daily walk.

At the Christmas festival we made a representation of the Bethlehem, and they proposed to me to make Saint Joseph, and I accepted charmed. It was great fun with all the kids dressed up and singing for the parents, who went to the event. 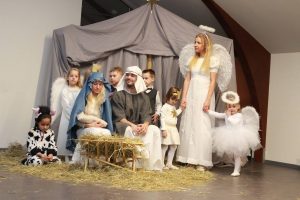 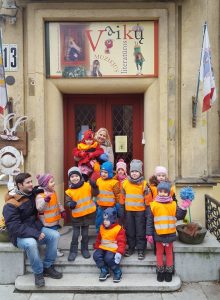 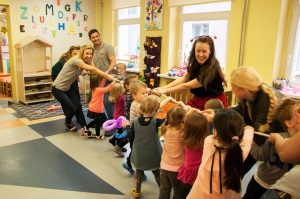 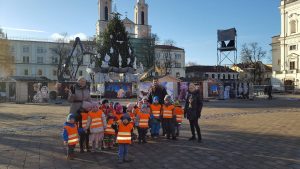